Sparkly and shiny accessories are on the rise. Along with all the other 80’s trends coming back to the runway, flashy pieces are joining in on this movement. Many people may think that these pieces are reserved for the holiday season, but designers are proving that sparkle is actually extremely versatile.  From tiny dazzling details on accessories, to full sequin suits, this dynamic trend has a lot to offer.

Tom Ford has been ahead of this trend and has included sequins in his collections for a few seasons now. His take on the sparkly accents incorporates more subtle hints, while Balmain embraced the trend in full force. Their complete looks work as an ensemble, but each piece would also be a beautiful statement on its own. Dolce & Gabbana is known for their love of the extravagant, so when they presented us with a sparkly black dress, we were not surprised. This trend will likely take over the red carpets during the next Hollywood awards season.

While sequins may remind you of the 80’s, they have actually been around for centuries. When King Tutankhamun’s tomb was opened in 1922, he was dressed in gold sequin-like disks. Leonardo da Vinci had sketches for what seemed to be a sequin-making machine. 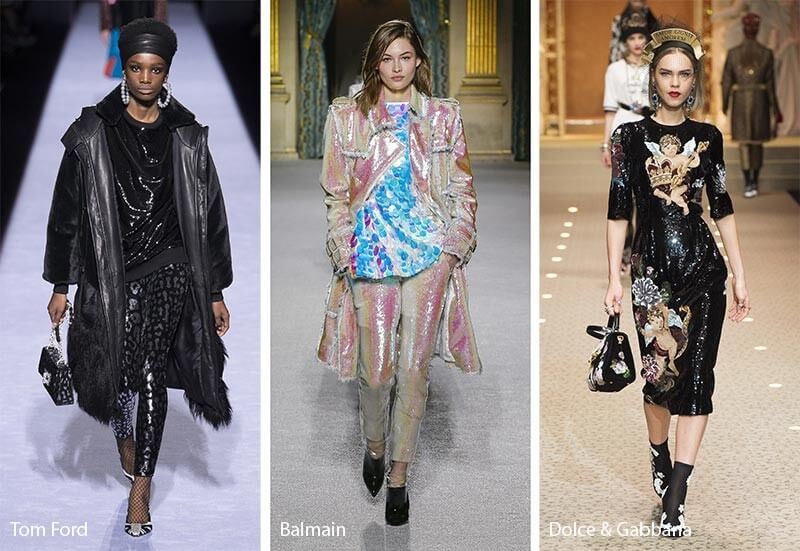 How to Wear the Sparkle Trend

There is no such thing as too much sparkle, but sometimes just a sprinkle is enough to turn heads. A shimmery bag or shoe can complement almost any outfit. You can also pair it with a more formal look, such as a dark blazer or a white button-down shirt to create some contrast and dimension in your outfit.

If you’re ready to embrace this trend full force, try using more sparkle in your make-up by brushing on some glittery eyeshadow for your next night out. You may be surprised by how much you like it!

PREVIOUS Post Hoop Dreams
Next Post Chatting with Minor History
This season brooches are back and it makes me so nostalgic for my Grandmother. I pinned three different styles to this blazer and I love the lapel party that it created.
Read More >
Two-time Emmy award winner Kathryn Eisman gave us a peek into her life of being a television journalist and sock designer. High Heel Jungle is Kathryn’s blog, and also her vibrant sock collection where she finds inspiration from all aspects of life.
Read More >
Rachel Pally quickly caught the attention of Hollywood A-listers and her flowing jersey garments became a must-have; her name, a household one.
Read More >

Stay In The Loop

Get on our list for all things particularly ravishing.