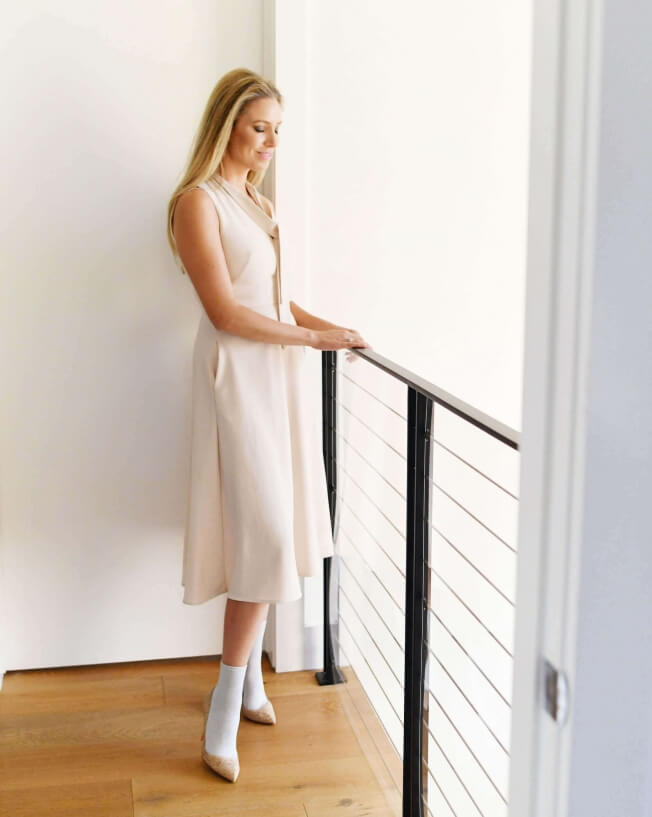 Fashion and lifestyle TV personality, and former model Kathryn Eisman, shared her inspiring journey from being a daytime model and author to her dream job of being a television journalist. Interviewing celebrities like Matt Damon and Mary J. Blige is just a few of the many A-list celebrities this fascinating journalist has gotten the chance to interview, and we got to sit and interview her this time around!

Melissa: Did you always want to become an author/TV personality?

Kathryn: I always liked television and writing, but I never thought or realized that one thing would lead to the other. When I started out, I was modelling, and I knew that it wasn’t going to be my path for many reasons. I wanted to find a way to have a voice and opinion in a way that was still exciting. At the time I was studying communication journalism and I wrote my first book How to Tell a Man by his Shoes, and the day I graduated, I went to New York on a book tour with my first ever appearance was on Good Morning America. It was an amazing experience that led me to be a guest on Today in New York by NBC. The ratings went very well, and they asked me to come back with a new position for me. One thing led to the other, through the book, I never thought I would end up being a Television Journalist. I actually ended up using all the same skillsets that I gained from being an author, because I was writing my own stories, producing them and creating them, but it was less isolating. Writing can be an isolating experience, but wonderful as well because it’s time of contemplation and going inwards. Whereas television is about going outwards and communicating to people. It’s a nice balance from a personal perspective because you don’t feel isolated or like you’re always out there, you have that natural equilibrium.

Melissa: How did you come up with the idea from your first book?

Kathryn: Back when I was modelling, I was just sitting and watching these guys walk past me. I was looking at their shoes, and without looking up at who they were I was guessing who they were. I realized that I could tell, not only who they were, but what type of men they were just by their shoes. In the middle of the night I woke up and had a revelation that I needed to write this book. I literally started writing it then. I had no idea that it would be published but I submitted it to three publishers and ended up becoming an international best-seller. It took on a life of its own, but it was a great minder that if you have a great idea you should act on it.

Melissa: Who is your favorite celebrity interview?

Kathryn: Matt Damon is the loveliest person. Kerry Washington has such a beautiful soul. Viola Davis was incredible as well. Margot Robbie is very impressive because she’s so beautiful, but very sharp, ambitious and nobody’s fool. I thought she was really inspiring, and it was great to meet a woman who has such a big career with eye on the prize. I left the interview thinking that I could learn a lot from her.

Melissa: How did you come up with the name of High Heel Jungle?

Kathryn: The idea is that as modern women it’s almost like we’re navigating this jungle, but a modern-day jungle. Whether it be professionally, romantically or in motherhood. It’s a wild time out there. The idea of High Heels is navigating modern life from a female perspective but with style. High Heel Jungle is how to be in the jungle and have grace and style as a woman.

Whether it be professionally, romantically or in motherhood. It’s a wild time out there. The idea of High Heels is navigating modern life from a female perspective but with style.

Melissa: Where do you get inspiration with your socks?

Kathryn: We’ve got different categories, like the sheers and cottons. I play around with different embellishments and strategically see what works. For the cotton socks, like Leave Me Alone, it comes from all sorts of inspiration, like being a mom. Everyone can relate to them and we’re pulling inspiration from all directions. Loved a newer sock and is for Valentine’s Day. The idea behind it is that I think we can sometimes feel so alone in our struggles and goals we want to achieve. Certainly, when you’re looking at Instagram and everyone looks like they’ve got it better, chicer, thinner – whatever it is. It’s obviously a myth, so I wanted to create a sock that was deeply empowering. Every step of the way you can remind yourself that you’re loved.

Melissa: What are some of your career highs and lows?

Kathryn: Originally, I wasn’t meant to be in LA. My husband and I lived in New York for 6 years when I was in NBC and that was a fascinating time – to be a 21-year-old chief feature reporter, hosting events and being a fashion reporter for NY fashion week – everything from politics to human interest stories. E! News was the hobbit of entertainment, and I ended up moving to LA and being the head of fashion lifestyle a couple of years there and getting two Emmy nominations. Any time you’re in media it’s not a traditional career path. It’s not like you go to law school and become a junior and then you work your way up to be a partner. It’s a very unusual trajectory, so you have moments where you love your show so much, but then it will get canceled and it’s out of your control. You become very resilient at where your life takes you because you might have to move cities. There’s only so much control you have over media because it’s changing every day, and you just have to do a good job. But I don’t think there are ‘lows’, I just think that you learn more when things go wrong.

Melissa: What’s a typical day for you?

Kathryn: Yesterday I was interviewing Mary J. Blige and Ellen Page for the new Netflix series – The Umbrella Academy. There is no same day. What I’ve tried to do is create a template for what I can expect certain days to look like.

Melissa: Do you practice any self-care routines?

Kathryn: When I was getting back into shape after pregnancy, I got into Pilates. I didn’t feel ready to go too hard because your body is still recovering and healing, and I also loved that I could do an exercise while lying down. Afterwards I started doing this exercise called Fit Body Bootcamp, and it’s only a 30-minute workout but you sweat a lot. I’ve just also become a massive tea drinker. My husband and I also take a bath every night together.

Melissa: Do you have any fashion icons?

Kathryn: My grandmother was such an incredibly stylish woman. She was in the Holocaust and arrived in Australia with all of her beautiful European-made clothing. Her theory was to leave the house as if you’re going to meet the most important person that day. Up until the last day, she was dressed to the nines.

Melissa: If we were to raid your closet, what would you have the most of?

Kathryn: I have an insane number of shoes. If I’m wearing a heel, I love a classic single soul pointed stiletto. I love a good sneaker. I have a pair of pink Nikes that I’m obsessed with.

Melissa: What is next for you?

Kathryn: I am really excited about growing the sock business, we have been very blessed with the stores that carry us and with our online store.

Melissa: What’s the one accessory you never leave the home without? 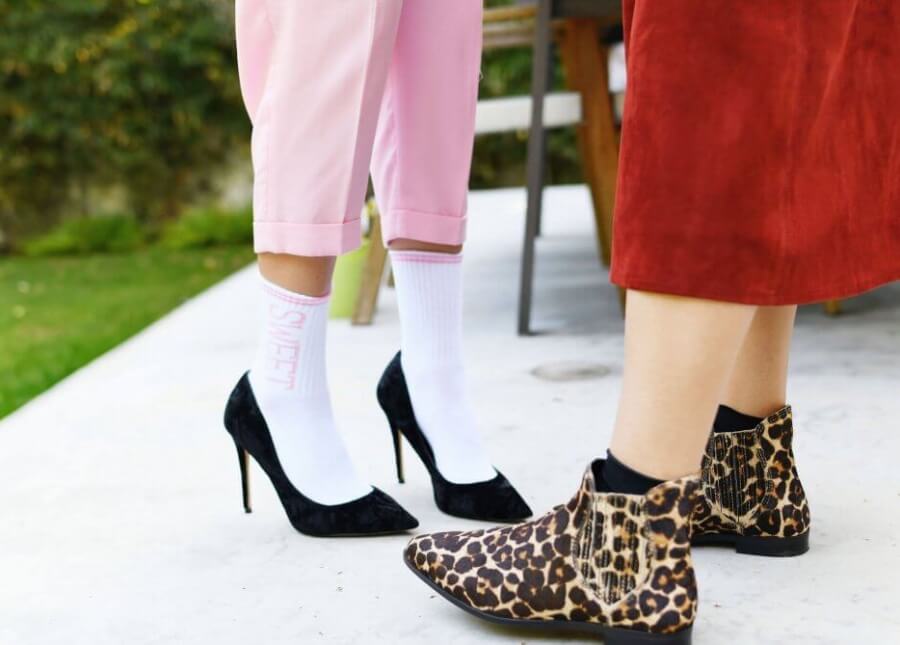 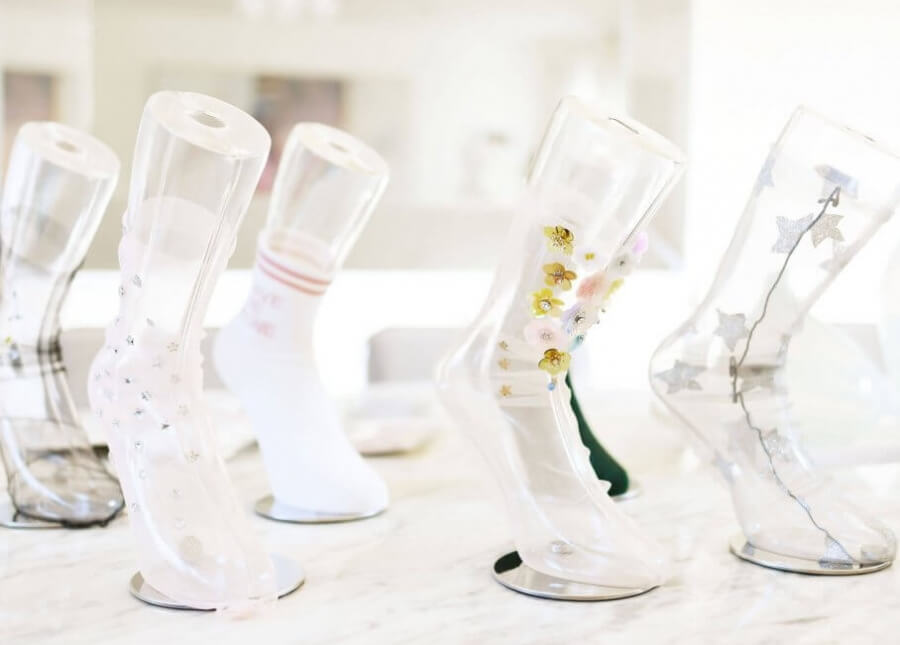 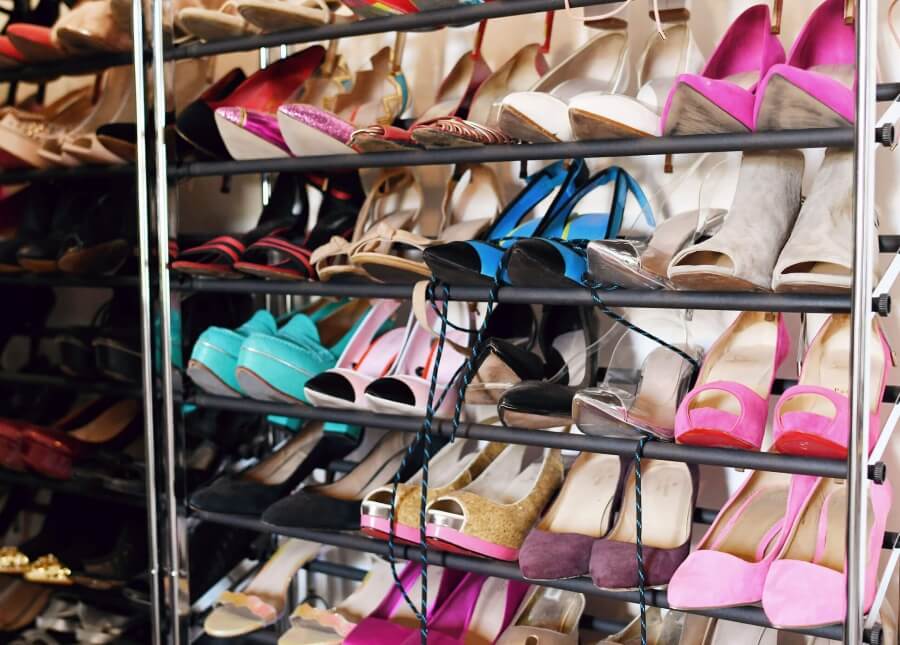 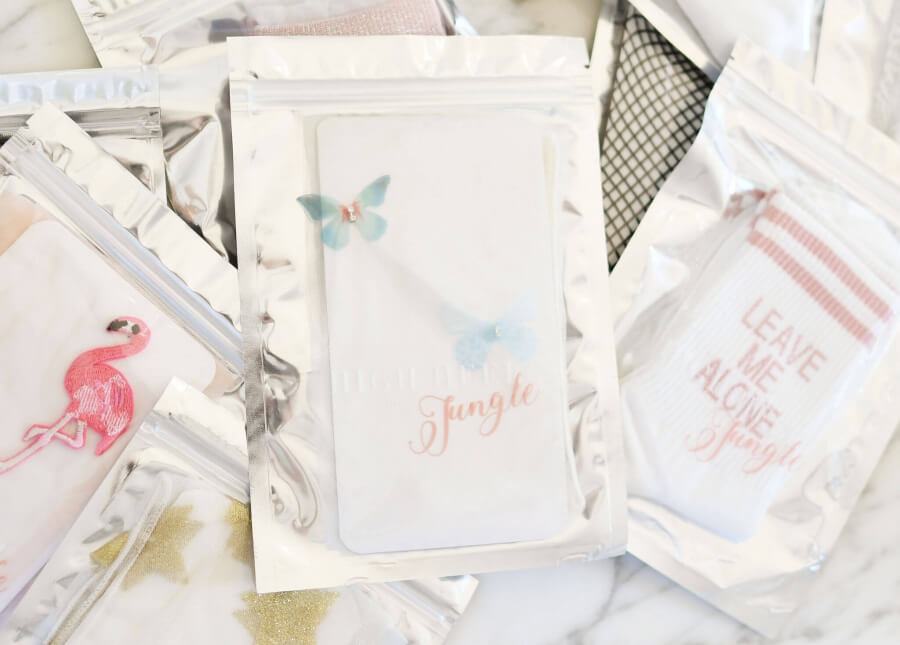 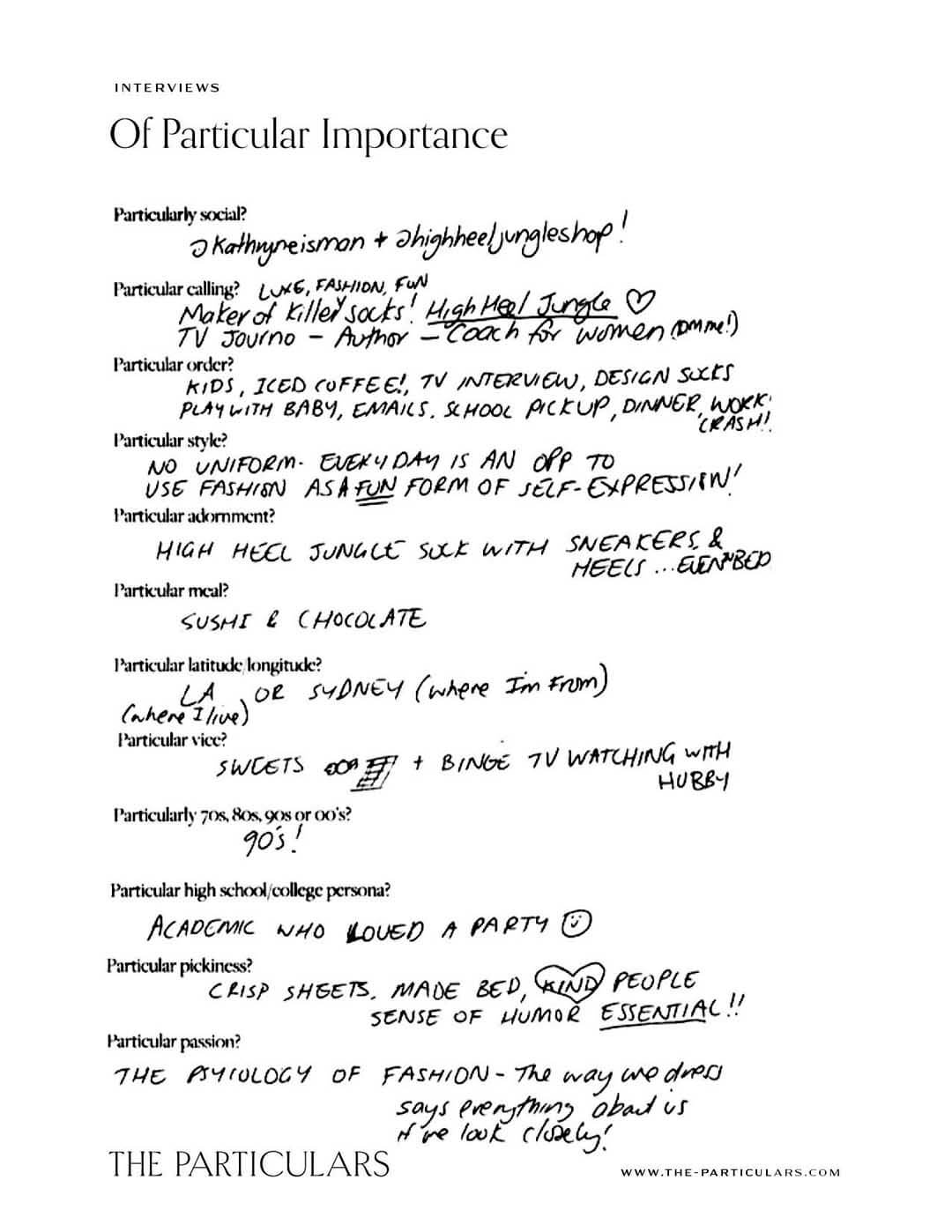 Particular calling: What do you do?

Particular order: How do you go about your day?

Particular vice: What is your weakness?

Particular pickiness: What are you finicky about?

Particular passion: What are you passionate about? 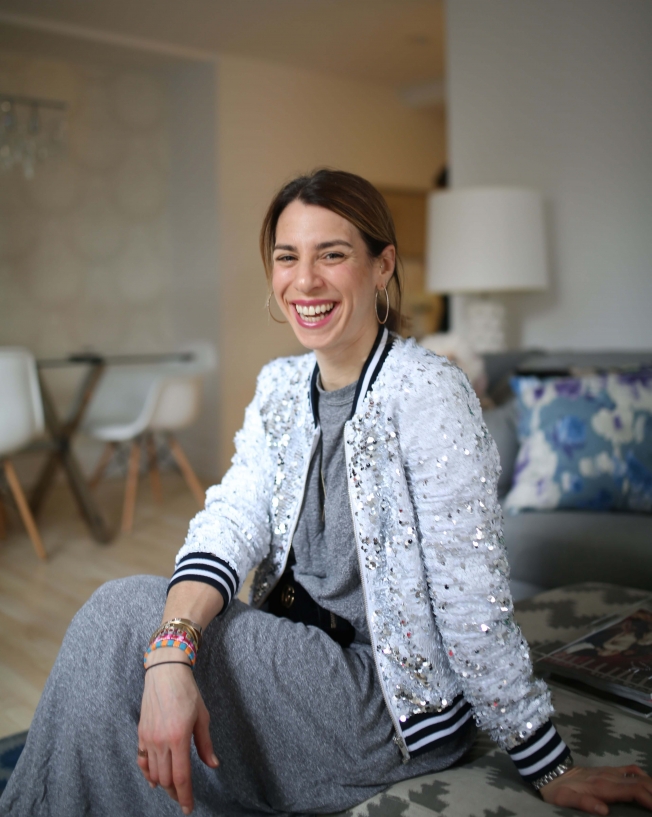 Need some fitspiration in your life? Meet Lauren Kleban, the woman behind the boutique workout craze, LEKfit! We had the awesome opportunity to sit down with her to learn more about how she built her fitness empire from her own backyard.
Read More >
This season brooches are back and it makes me so nostalgic for my Grandmother. I pinned three different styles to this blazer and I love the lapel party that it created.
Read More >
The Moment is a place where natural beauty fanatics can rejoice. We met with the brains (and beauty) behind the operation, Laney Crowell, to chat about her business.
Read More >